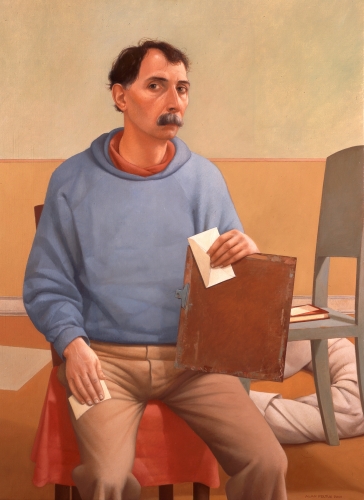 Alan Feltus was born in Washington, D.C. in 1943 and grew up in Manhattan. He studied for one year at the Tyler School of Fine Arts in Philadelphia, and then Cooper Union in New York (B.F.A. 1966), and Yale University (M.F.A. 1968). He has received many awards for his work that include the Rome Prize Fellowship, a National Endowment for the Arts Individual Grant in Painting, a Louis Comfort Tiffany Foundation Grant in Painting, two Pollock Krasner Foundation Grants in Painting, the Augustus Saint-Gaudens Award from Cooper Union, and the Raymond P.R. Neilson Prize from the National Academy of Design.

Alan Feltus has been represented by Forum Gallery since 1976 where he has had more than 12 one-person shows. In addition, he has had one-person private gallery exhibitions in Los Angeles and Washington D.C., as well as Chicago, San Francisco, New Orleans, Boca Raton, Wichita, and Atlanta, and has had solo museum exhibitions at the Boulder Museum of Contemporary Art, The Huntington Museum of Art in WV, and the Wichita Art Museum. His work is in public collections that include the Arkansas Art Center, the Bayly Art Museum in Charlottesville, VA, The Corcoran Gallery of art, Hirshhorn Museum and Sculpture Garden, and Smithsonian American Art Museum in Washington, D.C., the Huntington Museum of Art in WV, the National Academy of Design in New York, the Oklahoma City Art Museum, and the Wichita Art Museum.

Alan Feltus has lived in Italy since 1987. In his paintings, working intuitively, he choreographs figures in enigmatic relationships, without referring to live models or preconceived concepts and compositional ideas. He creates a silence in his paintings and avoids specific meanings, believing that paintings “which are difficult or seemingly impossible to fully comprehend” are the most interesting.